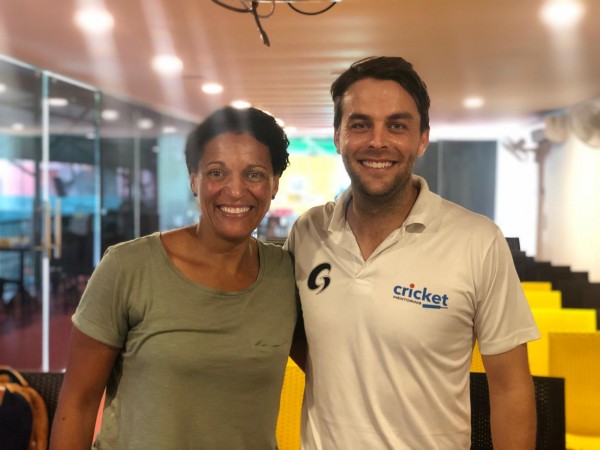 “Most people would say I was see ball hit ball kind of person and then I went through a bit of a bad patch and that’s when I actually started thinking more about the game rather than just doing more about the game. You know there’s one thing to be able to hit a thousand cover drives in the nets, but, you don’t get a thousand balls in that area to hit in a game. So I’m practicing something that I get probably, one or two chances in a game to do, but outside of that, what else am I doing? And how am I getting myself ready for all those other deliveries?”

Welcome to this special episode of The Process of Success. One of the reasons I say it’s special is because of our guest, Melanie Jones who I’ll go more into in just a second.

The second reason this episode is special is because we were recording it in India. The Karnataka Institute of Cricket in Bangalore is a strange place for two Aussies to record a podcast but there’s no better setting to discuss the journey of one of Australian crickets true stars.

Mel and I were in Bangalore for different reasons –  I was running a Cricket Mentoring Tour for young cricketers from Australia and the UK to experience India and train and play in sub continent conditions, while Mel was there to commentate on an IPL match a couple of nights after our chat but I didn’t want to miss to opportunity to hear the story of this legend…

Melanie or Mel Jones is a former Australian cricketer who, in recent years has turned herself into one of the best cricket commentators going around as she travels the world commentating on the major tournaments including the Big Bash, IPL and will soon be in the UK commentating on the World Cup.

Mel was an elite player. She played 5 Test matches and 61 One Day Internationals and is a member of the prestigious club of cricketers who have scored a century on Test debut – with 131 against England in the 1998 Ashes series.

Having played all her representative cricket when women’s cricket wasn’t professional, Mel has been a huge advocate for the women’s game and is incredibly happy to see the best cricketers in Australia and around the world become professionals in recent years.

Since retiring, Mel has done various things but in recent years has built her reputation in commentary boxes around the world. She not only brings a great deal of experience from playing at the highest level to the commentary box, but through her hard work and love of the game she also brings a real depth of knowledge about each and every player.

It was awesome to sit down with Mel and hear how a girl from the country has forged a very successful life in cricket both on and off the field.

When in India anything can happen, and on cue, the power went out half way through our interview… but as all true professionals do, Mel carried on as if nothing had happened.

No doubt you will pick up our mutual love for this beautiful country throughout the conversation.

Mel is cricketing royalty and it was a pleasure to spend a morning with her at KIOC. Her energy and passion for the game is obvious which I’m sure you’ll hear it in her voice…

You can stay up to date with what Mel’s up to at: