The 6 Pillars of Success 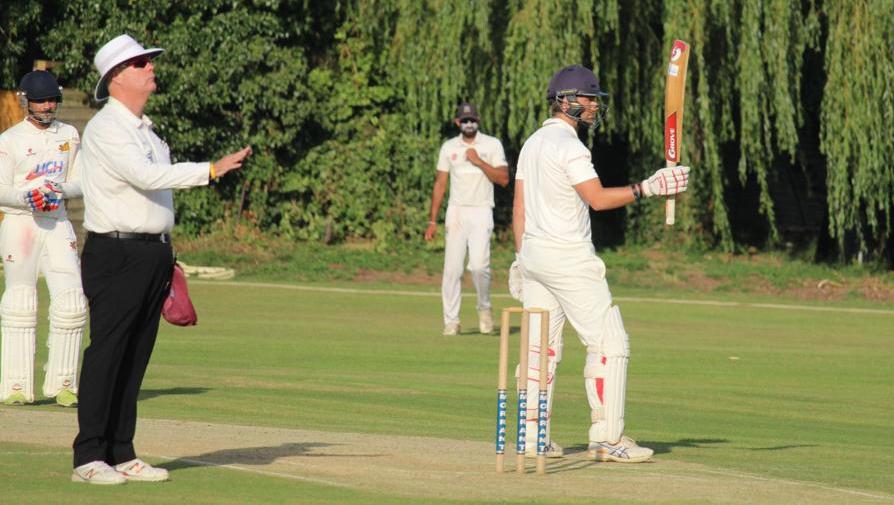 Have you ever asked yourself, what is it that makes Steve Smith or Virat Kohli so special?

What is it that separates the best from the rest? Not just in cricket, but in any sport or industry.

Growing up, I aspired to play cricket for Australia. Watching the Aussie teams of the mid ’90s and early 2000s, made me want to represent my country and travel around the world playing cricket, as it did for so many other youngsters around Australia at that time.

I sit here at 32 years of age and like many who dreamt of playing for their country, I unfortunately wasn’t able to achieve it. However, it wasn’t through a lack of trying. I was ambitious and desperate to make it happen, and my cricket journey and life has been incredible as a result of chasing that dream.

Growing up in a small town in central Australia had its advantages and disadvantages. I knew from a young age that if I was serious about pursuing my cricket, I needed to get out of Alice Springs as soon as possible. So, three days after my final year 12 exam and a week before my 18th birthday, I bid farewell to my mum and twin brother, and moved over to Perth to pursue my dream.

Although I got into university, I deferred my degree so that I could play cricket all year round. When I finished my first season in Perth (March 2006), I played in Darwin and this was the start of playing for 11 months of the year (with a small break in between seasons) for nine years in a row. After two seasons in Darwin (2006 & 2007), I went over to England for opportunities to learn and develop my cricket and life skills (2008-2013).

Through some decent performances in league cricket and second XI, I had a short but very enjoyable professional career with Middlesex County Cricket Club (2010-2012). My professional debut against Bangladesh at Lord’s, the Home of Cricket, was a very special moment and I was fortunate to play with and against some of the game’s great players. 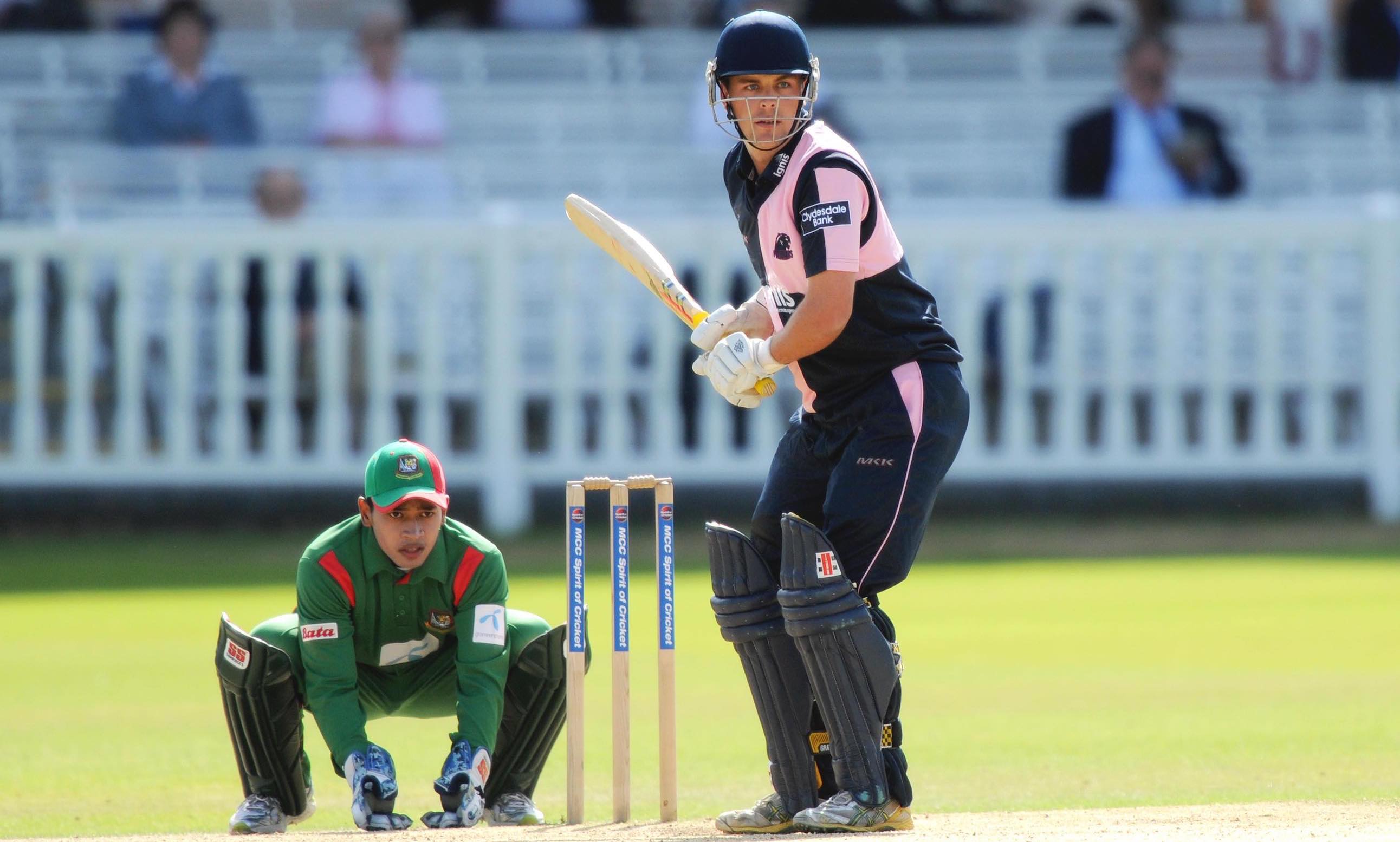 Batting against Bangladesh at Lord’s in my List A Debut

However, after three seasons of, at times, some very good but generally inconsistent performances (mostly in the second team), I was told I was no longer needed by the county, as I hadn’t done enough and there were some excellent young players coming through.

Being told your lifestyle and dreams are being taken away from you, is an incredibly hard thing to comprehend. However, I was able to accept the news and be okay with it, when Angus Fraser, Middlesex’s Director of Cricket, called me into his office in September 2012.

A year before losing my contract, I’d been playing the best cricket of my life. In between the 2011 and 2012 English seasons, I came back to Perth and played grade cricket for Melville CC. With my Middlesex contract in my back pocket, I didn’t have to worry about ‘trying to make it’ into the Western Australian side, which had always been a goal of mine since moving to Perth, five years earlier. This meant I had no ‘pressure’ to do well.

When I say ‘pressure,’ it was all coming from within. There were no external expectations. My parents weren’t pushing me to achieve things on the cricket field, unlike what many young athletes go through. All the ‘pressure’ was from my own mind and thoughts, which restricted me from playing with freedom.

Over the year or so prior to this Aussie season, I’d made some technical changes that started to ‘click’ and I began to trust my game. An improved technique, combined with playing with freedom, meant I finished with the most runs in the WACA 1st grade competition – 819 runs in 13 innings, at an average of 81.9. I scored three centuries and had a highest score of 182 (not out) and came third in the Best and Fairest award in the competition, despite missing the first two games of the season. I also played a second XI match for WA at the end of that season.

So when I got the news that my Middlesex contract wasn’t going to be renewed, I felt okay, as I was thinking, “I was the best batter in the WACA comp last year. l’ll go back to Perth and do well again and break into the WA side.” However, that never happened. With the ‘pressure’ back on to do well, despite scoring three hundreds that season (within a couple of weeks of each other), I wasn’t able to get back to the form of the previous season and went back to being a grade battler, who had some good days here and there. 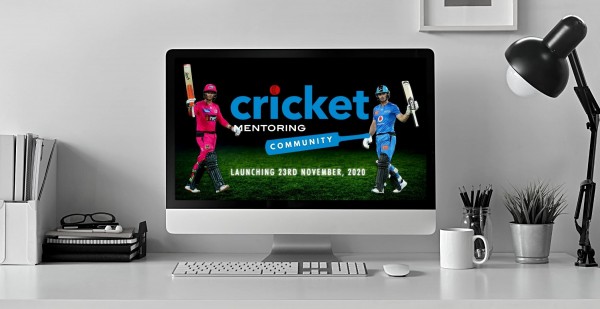 Upon returning to Perth full time after my final season in England in 2013, I became extremely curious as to why I was so inconsistent. On days I played well, I was as good as anyone, but why were these days so rare? What was it that made the best players different from everyone else? Why were some people so successful and others just average, despite seemingly working just as hard?

Because of the pain I’d gone through losing my professional career, I was desperate to get the answers to these questions and understand what separates the best from the rest. Around this time, I also began coaching young players one-to-one and wanted to offer them more than standard coaching advice, such as how to play a cover drive or pull shot. I wanted to help them understand all the factors required to perform at your best, and not just focus on technique.

On this learning journey, it became clear to me that while I worked hard at my game, I had no real understanding of my thoughts and emotions or the lifestyle needed to consistently perform at my best. I’d had some good coaches in my career, but didn’t have a mentor or someone older who’d been on a similar journey to me with whom I could speak to and get advice from (which is why I’m so passionate about being the mentor that I never had).

[Click here to read my article: I’m Trying TO Be The Mentor I Never Had]

I realised that when I was in a good place mentally, emotionally and physically, and my game was in good order, I would play at my best. That didn’t always mean I’d score runs though. Batting is incredibly hard at the best of times and there’s so many things that affect the outcome/result that are out of our control. However, looking back, I wasn’t even close to understanding and managing my thoughts and emotions, so how could I expect to be in control of my performances?

Over the last few years of continually finding ways to up-skill myself (reading books, articles, post-match transcripts, listening to audiobooks, podcasts and interviews), hours upon hours of conversations with former Aussie Test opener Chris Rogers, and lots of conversations with successful players and coaches for The Cricket Mentoring Podcast, I’ve come to gain a good understanding of what it takes to perform at your best or close to your best. 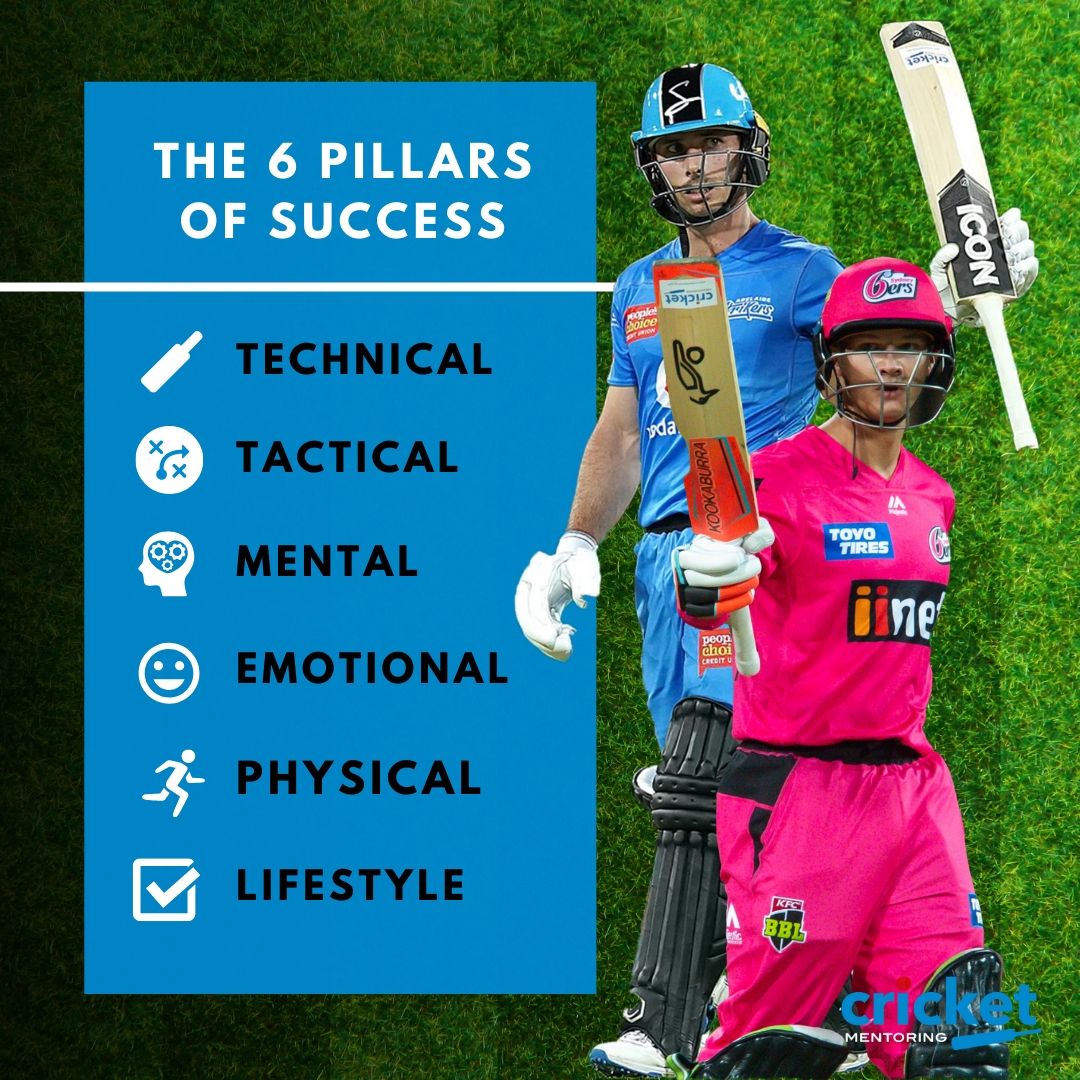 Through my personal experience and leanings, I now believe that there are 6 pillars to success, that are true for almost every athlete.

[Note: You won’t always be at the top of your game in all 6 areas, however, the closer that you are to your best in each pillar, the better your chance of ‘success’.]

WHAT SEPARATES THE BEST FROM THE REST

I now know what makes Steve Smith, Virat Kohli and Kane Williamson so special. They understand themselves and know what they need to do in order to prepare themselves in all 6 pillars, so that they have the best chance of succeeding, every time they step onto the field.

For me, it wasn’t a lack of skill. It was a lack of understanding. It was a fluke if everything aligned both internally and externally, and hence why I was inconsistent.

LEARN MORE ABOUT THE 6 PILLARS OF SUCCESS 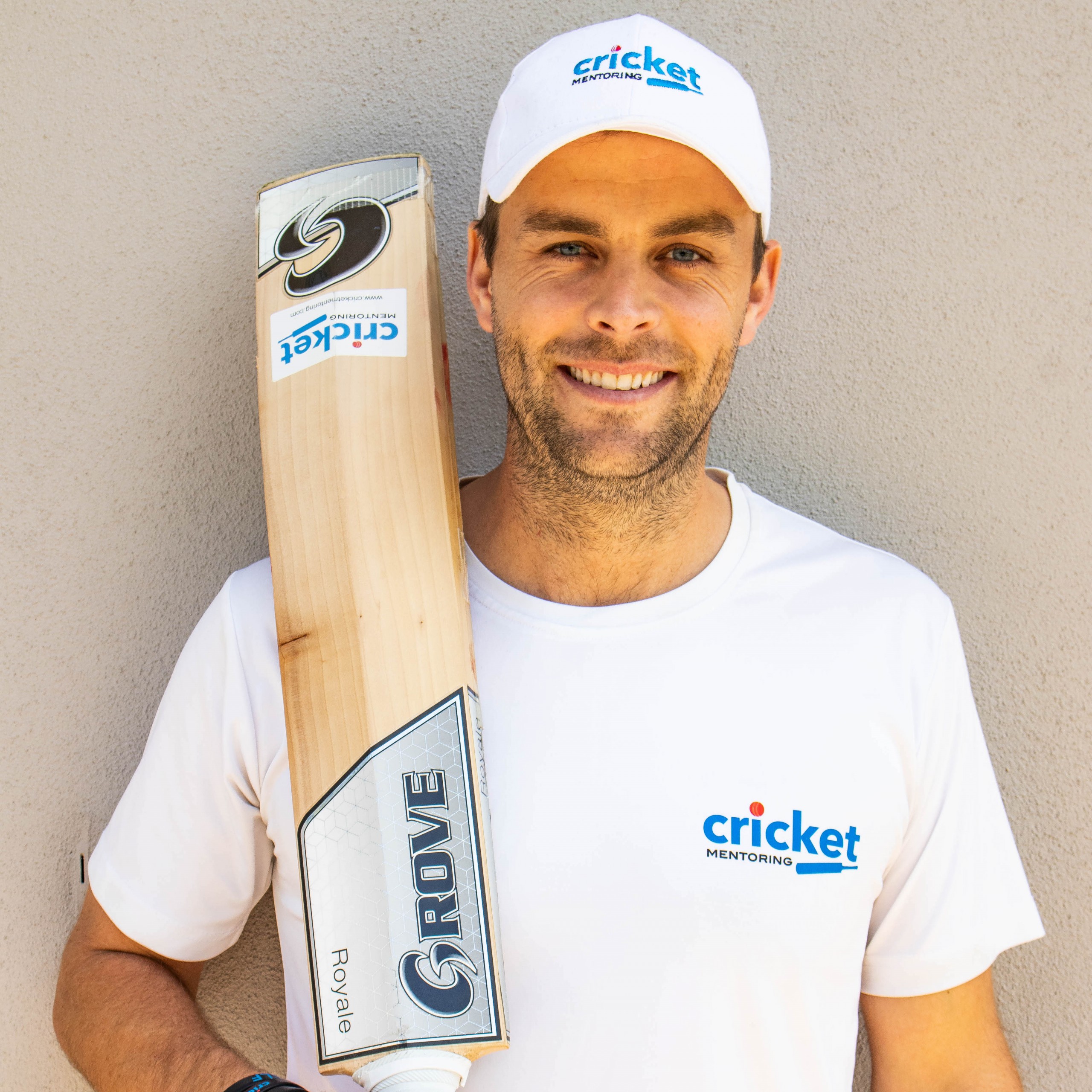 About the writer: I founded Cricket Mentoring in August 2016 with the goal of helping cricketers all over the world become the best they can be – on and off the field. As a former professional cricketer with Middlesex CCC (2010-2012) I’ve played with and against some of the world’s best players and worked with some elite coaches. I’m a Cricket Australia Level 2 coach and through my own personal experiences, practice and a hunger to always learn, I’ve developed and continue to refine my principles and philosophies on coaching and cricket. I believe there’s 6 pillars to peak performance (Technical, Tactical, Mental, Emotional, Physical, Lifestyle) and most athletes only focus on one or a few things. All of our content (articles, videos, podcast) covers the 6 pillars and has been created to assist cricketers understand what it takes to achieve great things in the game.

When I quit my job and went full time with Cricket Mentoring in July 2017 I decided to do a vlog (video blog) detailing my life as a player, coach, small business owner, entrepreneur and someone who is constantly trying to learn and become better. Fast forward almost 3 years and we’ve published just under 300 episodes of a daily vlog Scolls Stories and this year transitioned into a weekly vlog, Scolls Weekly. Click here to check it out plus the other hundreds of awesome free coaching videos we share on our YouTube channel. They are created to inspire people to chase their dreams and live their best life and are designed to help aspiring cricketers and coaches around the world learn and improve themselves. Please say ‘G’day’ in the comments on here, YouTube or any of our social media channels and make sure you subscribe or follow so that you get our daily tips and advice! 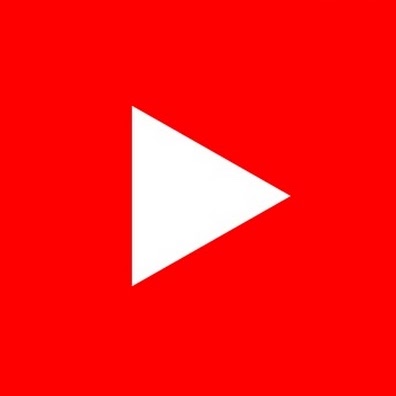 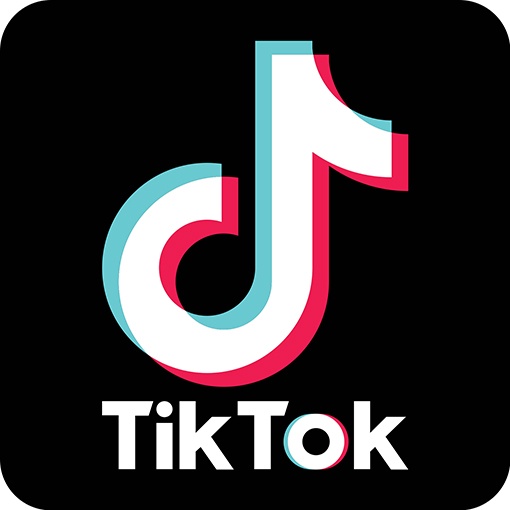 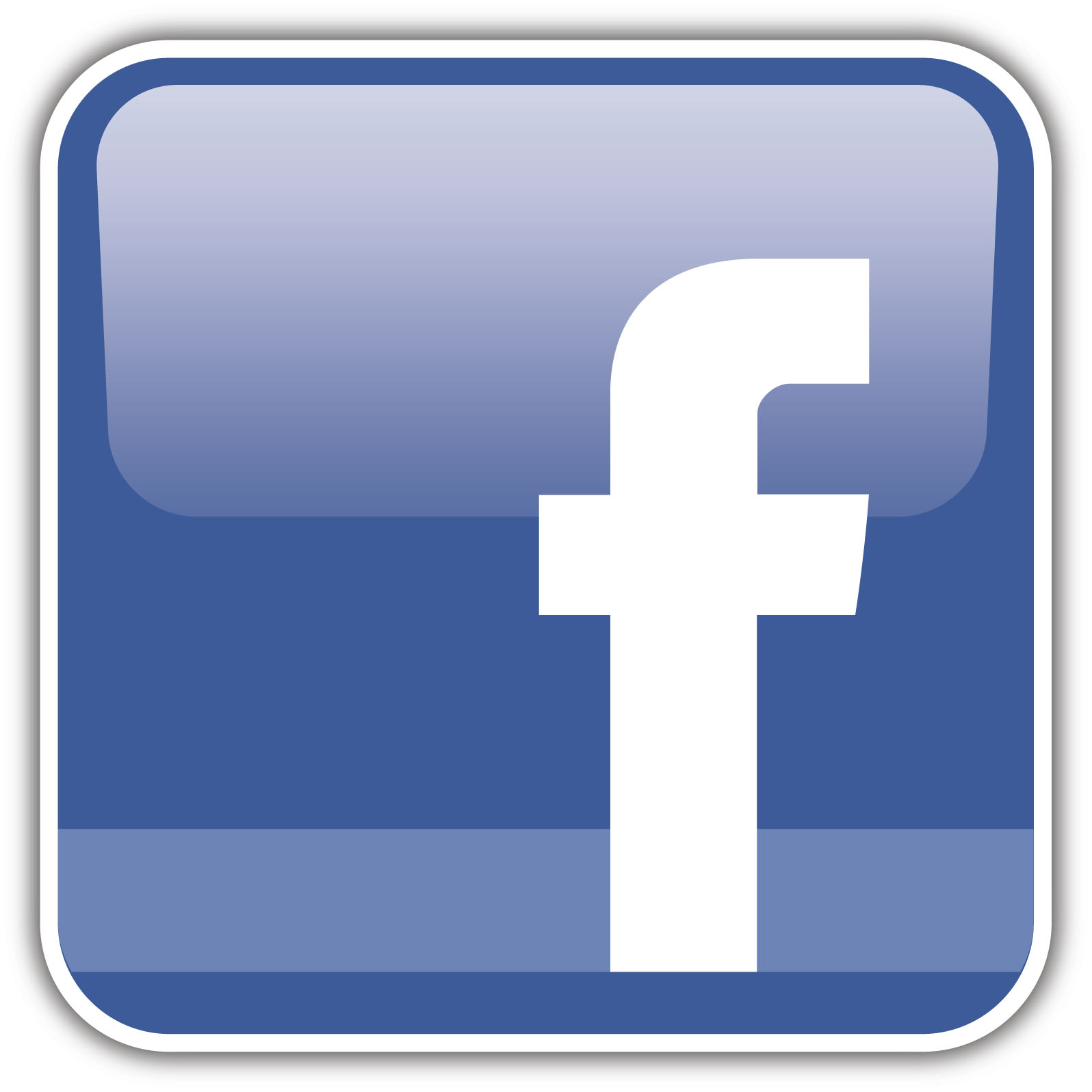 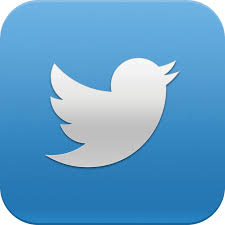