Finals Time Has Arrived – Is Your Plan In Order? 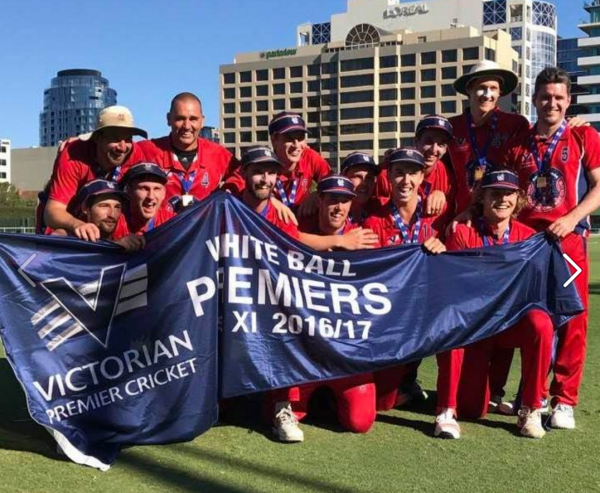 March heralds the arrival of finals inn the Southern Hemisphere. The slog of pre-season through the damp, dark and cold months of July and August seem so distant. Form and hope that fluctuates through a season reaches a point of new aspiration. Red ball. White ball. Short form. Long form. All is now able to be culminated at the pinnacle of the season where long-lasting memories that enrich the history of a club.

Reflecting upon the season behind, revisiting plans and strategy, is useful in reaffirming the value of reward in playing finals. By now, little (if any) improvement for skill and technique can be gained from more practice sessions. More so it is the focus on being in control of and comfortable with:

These are some of the key elements that have been the foundation of the approach taken by Cricket Mentoring in all of the content, lessons, podcasts, blog posts and direct engagement with our audience. The finals provide that wonderful occasion to put it all into practice.

The depth of communication that we have with the Cricket Mentoring audience keeps us grounded in recognising the different methods which have a positive impact on the performance. Regular feedback we receive direct from players that have followed the 5-day challenge or player roadmaps is evidence of this.

For the purpose of sharing from experience, here we present and reflect upon a recent case study in 2017 with Melbourne Cricket Club.

The First XI had gone through a year of considerable restructure in leadership, personnel, game plan and preparation. A new captain, some senior players and a youthful group (more in the 17 to 19 year age bracket) had a mixed season, very good form in white ball matches that resulted in winning the One Day Final, yet the last three matches of the season were all losses or draws heading into the finals. We couldn’t bowl teams out, were unable to defend a score, had lost the ability to build meaningful partnerships with the bat.

A top-level position was eroded to just scraping in. The advantages of home ground and needing only to draw to advance were not achieved. The only way ahead was to find a way to win. To complete the picture, the ongoing success of the Victorian team meant that first class players in Tremain, White, Gotch and Harper were unavailable with Pucovski still recovering from concussion.

During the last round, the coaching staff openly reviewed the position with the players, focused on the things that we were good at with confidence and control. A few minor changes to player roles were considered and activated. Agreement was made on the way we would play. Our intent to be bold and committed that we were going all the way (even though we had just made it).

We then documented this is into a short handbook with an individual copy for each player who was able to possibly play in the finals to use as needed. We created for the Demons – The Plan To Win The Championship 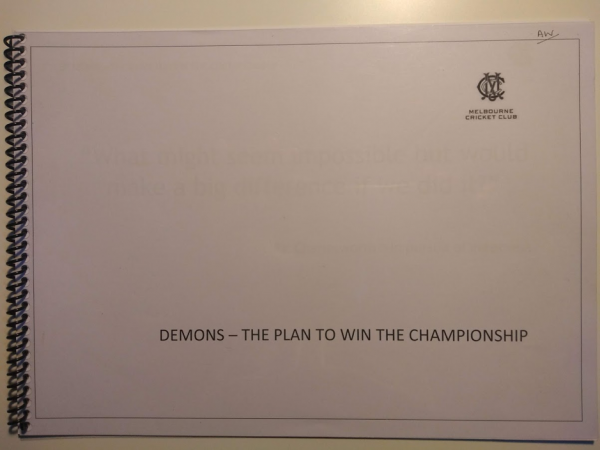 At the start of the season, when the club plan, strategy and values were presented to players, management and support staff there was a direct focus upon a specific theme. This had been borrowed from Ric Charlesworth, one of the greatest ever coaches and strategists in Australian Sport:

“What might seem impossible but would make a big difference if we did it?” 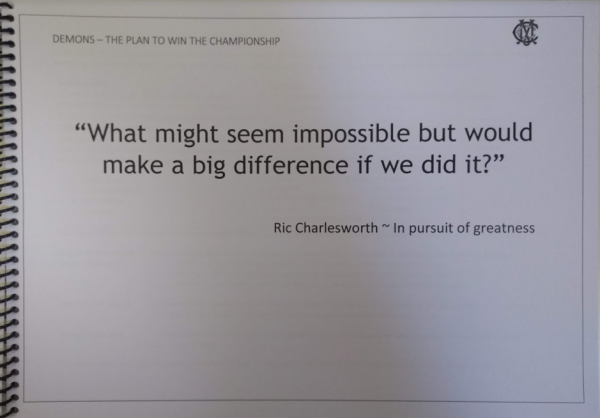 Now being at the pointy end of the season, this question was revisited and allowed the boldness to be more easily accepted. The question had been asked once. We now had a different context where it applied. Nobody was expecting us to do much. Our focus internally had been refined and sharpened. We were together as Demons with a plan.

To set the right tone, a simple message of congratulations opened the document.

Then a reminder of the Philosophy and Strategy that we had followed together:

The Philosophy and Strategy were supported by the Pillars of Preparation:

And Actions aligned to the Strategy (as noted below). 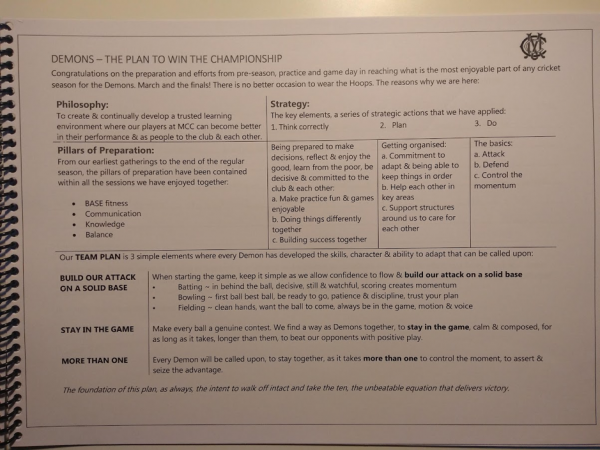 The Team Plan had been refined to suit the position that now faced us ahead in the finals series that contained a focus on roles where each player, every Demon, was able to contribute in some way and create a greater sense of togetherness as a team.

Rounding it all off was the foundation of the Team Plan that had been followed all season:

The unbeatable equation that delivers victory.

Shifting then to a more personal focus, a continuation upon the Player Roadmap exercise that many had completed and followed during the season, was an invitation to record any meaningful aspect that was present when the player was going well and feeling good. This can then be used as either personal affirmation or to reinforce in discussion with the coaching staff to assist focus.

With the plan as a team and individual in order, belief to play with a winning mindset was established. 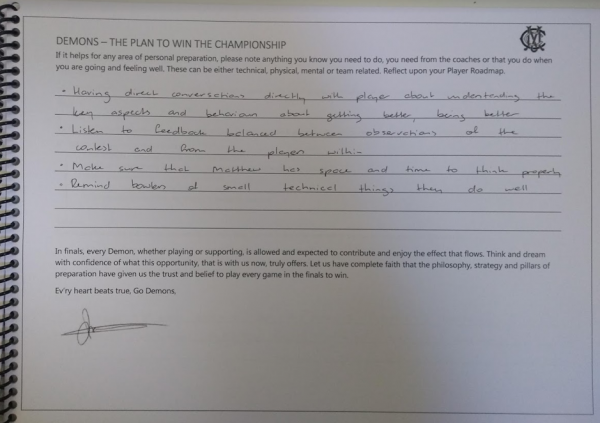 As a lower ranked team, the only choice and path available was to bowl teams out, take the ten!

The Demons embraced a Bowling Plan that every player understood, believed in and committed to. 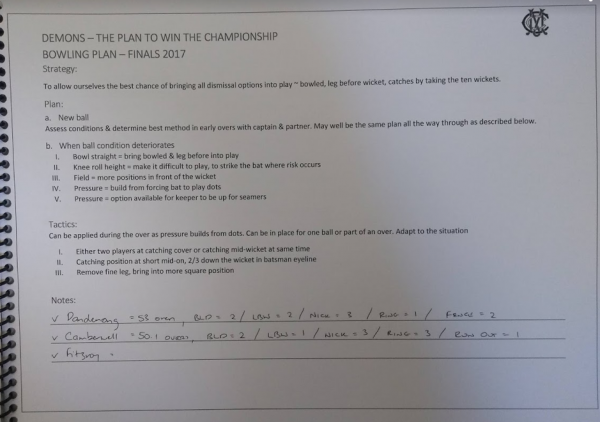 The balance of the team provided an opportunity to attack with the new ball, find the right balance of aggression and control. Get ourselves into the contest and have clear communication with bowling partner and captain.

Once the ball condition deteriorated, the plan was around creating maximum wicket taking opportunities and applying tactical pressure with the keeper and fielders in support. Remove defensive reliance upon a fine leg, keep fielders in the eyeline of the batsman. Subtle in creating the feeling of restriction.

The outcome was the majority of wickets were taken of the top order bats being dismissed bowled, leg before or nicking behind. A momentum was created that surged through the bowlers and fielders keeping the energy and intent levels high. The Demons were hunting. The batting team core had crumbled. 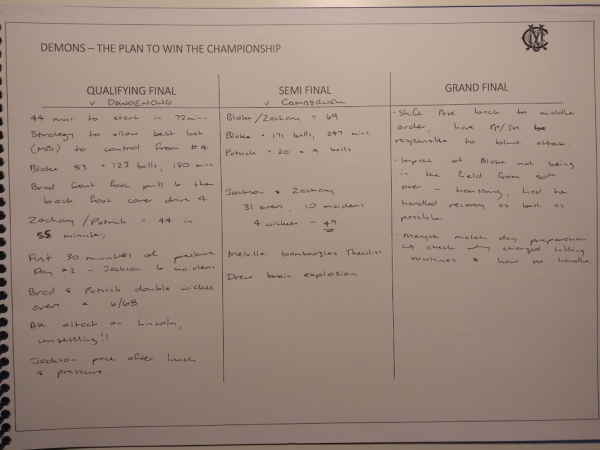 The last page in the book was for any notes to be captured around the games, with our path to play in the Grand Final openly stated. These are a copy of the performance moments that directly related back to where our plans had been well executed. Moments where having things in order provide the outcome. Moments where the Demons took control of the match momentum with skill and emotion.

These formed the key points for the coaches to apply in reviews with the players during breaks, post-match and at practice.

However, with hurtful honesty, we were unable to sustain the flow of good play all the way to win the Grand Final. Fitzroy Doncaster, an admirable and deeply respected opponent, batted first and scored 309 after being 5/286 in 110 overs. A score that we felt was well within our capability, the suspected winning range being 340.

The Demons found it hard to get ahead of the game, losing a wicket at a challenging time and finished short at 266, the match going deep into the third day with Matthew Brown making a majestic 134 not out. 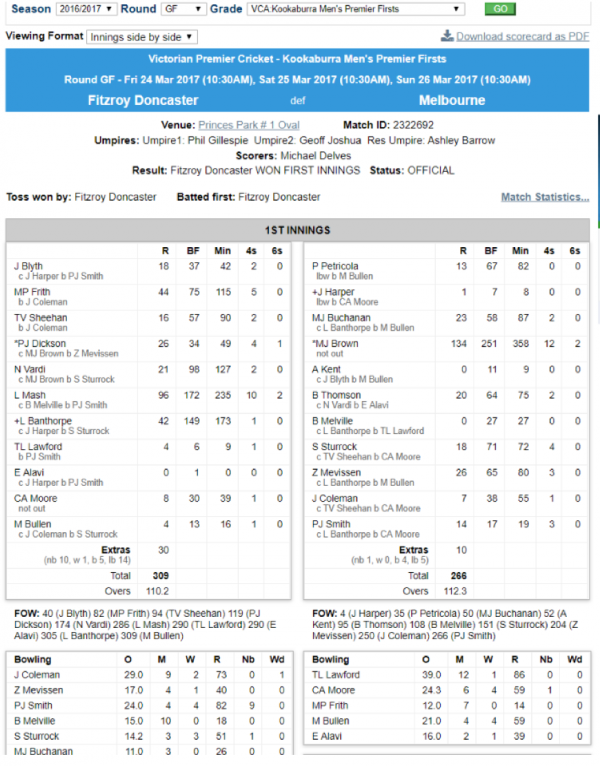 It had been many years since a Grand Final had been in the balance beyond the first day. A testament to all players involved with so many finding it within themselves an ability and spirit to rise to the occasion.

If we are able to help yourself or club further, or if you would like a copy of the blank template of “The Plan To Win The Championship” please feel free to send us an email to either:

Enjoy March, embrace the opportunity, hold the moment and enrich your history. 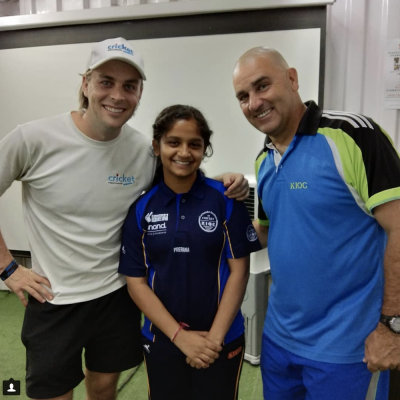 About the writer: Andrew Walton has a unique depth of experience from a coaching career that has involvements across the spectrum of cricket in Australia, India and England.

Currently in the Cricket Australia Level 3 HP Program, Andrew has been the Head Coach in Premier Cricket Men’s clubs Melbourne (3), Prahran (4), Fitzroy Doncaster (2) and Hawthorn Monash University (2), and a season of Premier Cricket Women’s with Plenty Valley. International experience has been gained from regular visits (6) to the Karnataka Institute of Cricket (KIOC) in Bangalore and involvement at Middlesex County Cricket Club as a guest coach in 2014. In 2018, Andrew was appointed by Cricket Victoria as Head Coach of the Blind Cricket team for the NCIC and has since been appointed by Cricket Australia as the Assistant Coach of the National Blind Cricket team.